Koreans say toast, we say sandwich. There's nothing like a good old fashioned sandwich, but unfortunately I discovered that the closest thing to a western sandwich in Seoul is Subway.
Luckily, a Korean woman who founded Isaac in 1995 created what I like to call a "Korean Sandwich" and my students like to call "toast."
During my first week of work in Korea, I noticed a steady crowd eating at Isaac which is adjacent to my companies building. A week later I gave in and finally decided to try the "toast" after many of my students recommended it to me.
At a first glance, Isaac toast looked totally unappealing. Who would want egg, cabbage, pickles, and some sort of processed ham slapped between two garlic buttered pieces of toast? But right after my first bite of "Isaac special toast" I realized what all my students had been raving about! The outside of the toast is buttery and warm which compliments the crunchy pickles and cabbage inside. The toast is a sweet delight complimented by a tangy saltiness added by the ham and pickles. 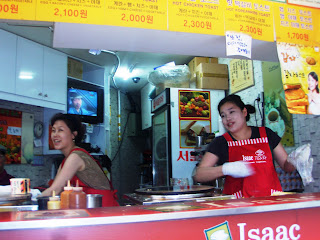 After doing a little research I learned that Isaac truly is a special company. According to the English version of the company website www.isaactoast.com, an old Korean woman opened a sandwich shop to make ends meet when her husband was diagnosed with a severe health condition. This woman has gone a long way from her small street food stall outside of Chungjoo University in Seoul, to a major franchise in Korea and a new location in Los Angeles California.
Isaac's staff is always outrageously happy. They certainly stay true to the Isaac mission: "We're happy to make you happy!" Last week there was a  women from Issac depositing wads of cash at the bank. I pointed at her Isaac apron and gave her a thumbs up and in return she laughed and mumbled a bunch of Korean words back. The amount of money she was depositing at the bank was surprising to me because the most expensive sandwich on the menu costs only 2,300 won or around $2! 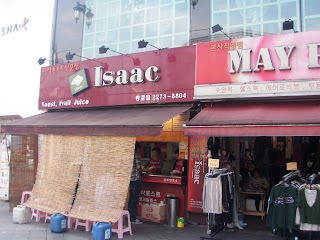 To find an Isaac near you visit the Korean website at http://www.isaac-toast.co.kr/# or visit their location in Los Angeles, CA near UCLA in Westwood.

If you have any questions or comments about Isaac please leave them in the comment box below!